I'm using the demo application ffmepg RVMEDIA V6 on XE10.2 to connect four rtsp network cameras. As a result, the streaming is not smooth but the worst thing is that artifacts appear in the image, as if the decoder was missing packages to paint. All the cameras point to the same scene but in the received streaming you can see a big delay between the different cameras. sometimes more than two seconds.

But, if I open several cmd windows and run ffplay using the same ffmepg libraries as the ffmpeg-demo appplication, this doesn't happens.

I mean, the streaming is smouth and the images are clear and sharp, with no artifacts.

The artifacks I'm talking about looks like the "Testing RVCamera - Video blurred". but sometime it is worst!

Is there a way to config the FFMpegProperty in order to avoid these artifacts? And reduce the delay?

I've been testing using RVMedia v6. Now I'v moved to RVMedia v7. and modified the TfrmMain.SetCam(..) to assign the options you said. But it doesn't work.
With V7 the delay is even worst. it seems like the video stream is accumulated (dumpered/buffered?) and delivered much later to an artificial frame rate.

In summary, it has a much worse performance than the previous version.

I've tried the latency=0 options with the same results. it is, RVMedia v7 ffmpeg demo project, and four cameras pointing to the same scence are displayed with a increasing latency/delay and depicting image artifacks that other tools (ffplay.exe/rtsp-client-demo.exe) using the same ffmepg libraries (ffmpeg-4.1-win32-shared from Zeranoe FFmpeg Builds <http://ffmpeg.zeranoe.com/builds/>) doesn't (see attached screenshots). 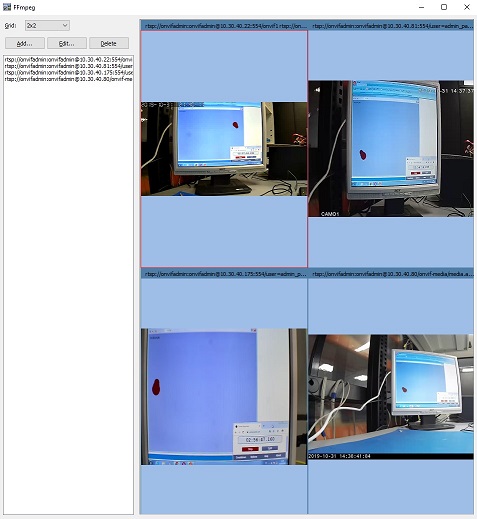 How can it be possible? How can I fix that?

Can you open these cameras for us for testing? You can answer in a private message.
Top

You can use this public trafic camera:

if you let the program running for a while (3 minutes or so) the image starts freezing and finally it stop playing in one of the viewer.

At the same time I have running two instances of VLC using the same url with no interruption.

Do you still think there is nothing in the RVCamera component?

I am trying to reproduce this problem (using the compiled version of FFmpeg demo for v7.0).
Currently, videos displayed for about 20 minutes.

In my test, VLC shows even more delay than our demo (yes, slightly more delay in VLC).
However, it really displays video more smoothly (in our demo, sometimes video stops for a moment and then played more fast to compensate).
We will investigate it further...
Top

Well, after 30 minutes one of cameras stopped displaying video. But it was not because it hung. A connection was broken (due to a larger delay in receiving video).
This demo does not make attempts to reconnect. You can implement it yourself in OnEndVideoStream event. But limit a number of connection attempts, to avoid infinite connection to a closed video source.
Top

It wasn't take so mutch time to hung. Specially if take into account that the vlc streaming is live (0 lantency9 and th rvmedia project wasn't "live". it is delayed or something like that.

What I'm asking is how can I avoid that, playback two or more RTSP network cameras without latency in order to see a live streaming without image artfiacts.

In my tests, VLC player's latency is greater than the default TRVCamera latency. On this camera, I can see cars in our FFmpeg demo first, and only then they appear in VLC player. Nevertheless, we will upload an update soon which will completely remove frame buffering in TRVCamera if Latency = 0.

I still cannot reproduce hanging. The connection may be broken because of a time out, though.
Top

OK, thanks for try to reproduce my issue.

Is there a chance than the RVMEdia 7.1 fix this issue?

I think it is easy to reproduce, just use the ffmpeg demo project and configure it to connect two cameras with a regular changing image. Like this,
http://92.154.56.150:8888/mjpg/video.mjpg

You will see how gradually the playback slowdown.

If I run three instances of the program conecting to three differents local network cameras, it works fine, it is, the image on all the programs are more or less synchronized along the time.

But, if I setup the three cameras in one single instance of the program, the playback starts unsynchronized and finally are completely worst, slow and with a big delay between each camera.

So, summaryzing, the v7.1 is not better than v6 or v7 in RTSP multiple network camera situation.

Is there any other think I can change?